I spent the weekend in Northern Italy with a few friends. Italy is marvelous! I hope I'll get to spend some more time there this next year. We had a good trip, first sleeping in a barn in Thun (which is not in Italy) and then camping in Bellagio near Lake Como. We did not bump into George Clooney, who apparently lives on the lake. It's unfortunate, too, cuz I bought sunglasses before the trip so that I'd look cool when he asked for our autographs. But alas, he wasn't on the continent apparently. And then yesterday when I was on the train with my Jewish friend who is mom's age, I said, "hey, do you like my glasses?" and wouldn't you know the practical mother in her said, "how much did you pay for those? You know you're going to drop them or lose them eventually. We sell glasses for 10 francs in our shop. You can come buy them there next time." She really didn't appreciate the coolness of them, I don't think.

Ah, but I digress. I was talking about Italy. I'll have to write more about it later, and about how we entertained ourselves in a 4.5 hour traffic jam on the way home. But for now--a picture of my travel buddies: 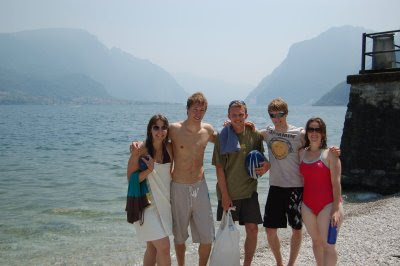 Mallory, Raphael, Benjamin, Dominic, Aubrey after a swim in CHILLY Lake Como on Saturday.
Posted by Stephanie at 11:36 AM