It's about time someone updated this blog, and since nobody else has gotten around to it, I guess it'll have to be me. Let me try to catch up a bit:

Italy was lovely, as I said. We drove to Thun the first day and picked up Ben at his Grandma's house. (Turns out I can understand Bärndütsch pretty well--well enough to respond correctly to questions. Many of the stories-on-tape or cds that the little girls listen to are Bärndütsch, and I guess it's been sticking in my brain. So for those of you trying to learn...that's the way to go!). We walked from the farm on the hill down to town, saw the lake and a bunch of fancy restaurants...and found a merry-go-round. 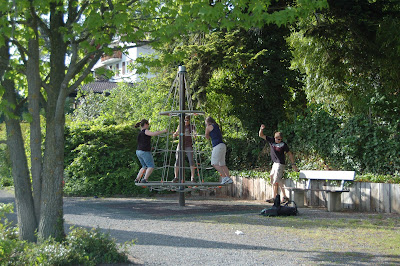 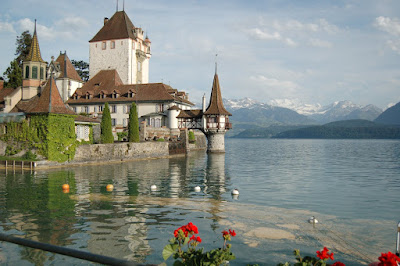 And a castle of sorts. One of my favorites I've seen in Switzerland, I think.

The next day we drove through Lugano and Como on our way to our campsite in Bellagio, and we camped on a hill at the edge of town. We had a couple of cute little camping neighbors who were 2 and 4, and who quickly decided that playing soccer with our guys was the very best part about camping, and they were in our campsite every time their parents turned around after that. Bellagio has old streets, fireflies and olive trees, and little winding staircase alleys that divide gardens and fields, and I enjoyed walking around town with Aubrey and Ben. Saturday and Sunday we went swimming, ate ice cream, and drove along the lake. We got stuck in the world's longest traffic jam on the way home. Fortunately we had ping pong equipment, snacks, and music. Entertainment included playing 20 questions, riddles, and a game of HORSE, throwing the ping-pong ball into a plastic cup on the dash, and sticking to the standard rule that a person has to shoot from the same place from which the previous shot was made. 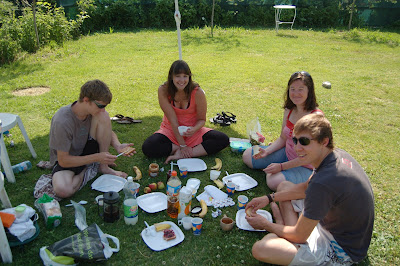 Mmmm, breakfast! Mom, we enjoyed some of the delicious coffee you sent me in my stocking for christmas. Toffee nut one morning, and candy cane truffle the next...very posh camping. :) 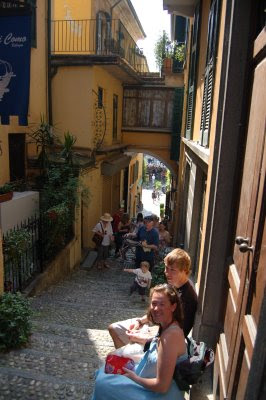 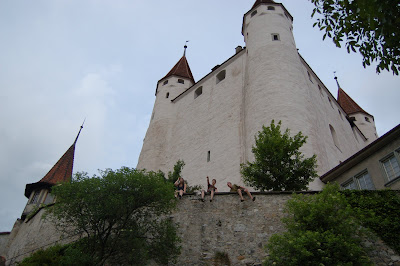 Posted by Stephanie at 9:09 AM