Guess what!? I got a whole garbage bag of evergreen branches for FREE! I know that might not impress you Oregonians, because you can just go out in your yard and clip a few if you want to make a wreath. Still, it's a fact that evergreens are wiley tempters this time of year. I bet that like me, you enviously cast your eye upon the neighbors trees and catch yourself thinking things like, "they wouldn't even miss this half; they totally can't even see it from their window." At home, even with our own collection of fir trees on the property, I can hardly walk down the hill toward the cemetery, past the big, glorious field of squat little Douglas firs, without thinking about my hatchet and which tree would look best in the living room. That none of them is for sale (how stingy!) and the owners don't live on the hill doesn't help the situation. I'm sure you can sympathize. Here in Basel though, Christmas greens are EXPENSIVE! Five francs for a couple lousy short sticks on Marktplatz last week!

(As an aside...when we were little, Brian had a particular affinity for sticks. Well, ok, we all did, truth be told. But Brian left his around the yard and would get quite upset if we picked one of his sticks up and tried to use it for whatever we wanted a stick for (poking around in our gardens, for example, or stirring the "cement" in the dump truck). Gregg and I tried to respect Brian's right to personal property and use sticks that he hadn't laid claim to, but we agreed he was taking things too far when he began claiming sticks that were still on the apple tree. After that, we decreed by the authority of being older that all twigs on the tree belonged to no one and could, therefore, be claimed by anybody. After that, when Brian tried to argue that the stick I had in hand was his, demonstrating that I got it off the tree was a swift and sure defense of rightful ownership).

But back to my story...the neighbors were cutting down a couple trees yesterday, so I toodled up the road and asked if I could take some branches home. They said yes, and voila! Enough greenery (in a variety of colors, no less) to make at least 2 wreathes. Now I just need ribbon and wire.

Would you believe I started out to write about Zurich?! Saturday I went to the Brandi Carlile concert with Melanie from school and Raphael. The concert was good--about what I expected, and well-worth going (check it out on youtube). I knew all the songs she played except for 2. The best "unexpected" thing about the concert was noticing they were all looking very Northwest in their western style, button up shirts. One guy in the band even had his blue plaid flannel on. Does that say Great Northwest, or what!? :) It was my first time in Zurich, and it was a good time to go. The city is alight with Christmas decorations and there was snow. I stayed at Melanie's house overnight and Sunday I saw Zwingli’s church, the university and old town, and this funky little boat-theater that moves around the lake giving regular performances. It would be fun to go to a show sometime.

Back to preparing tomorrow's presentation on historiography in South Africa...but then, afterward (after tomorrow's presentation, that is), I'm going to a handball game. Handball in CH isn't like handball in the states. The best way to imagine it is this: It's just like Basketball, only with soccer nets and goalies instead of hoops, and you don't dribble--you throw a sticky ball around instead. Oh, and you can travel. :) That's my pre-handball experience description of the game. I'll let you know if I need to revise it afterward.
Posted by Stephanie at 6:39 PM 6 comments:

The goose is getting fat

Look what arrived in our mailbox this week: 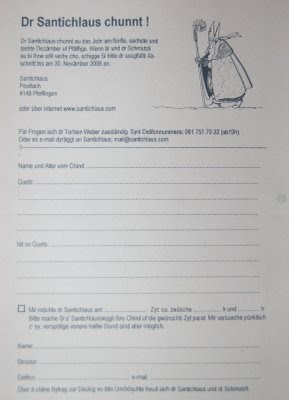 It's a notice announcing that Santa Claus will be in Pfeffingen the 5th, 6th, and 7th of December this year. Anyone who wants him to stop by and visit is encouraged to provide their name and address, their preferred day and time frame, names and ages of the kids, and (what cracks me up) the good and bad ("Nit so guet") things the kids have done lately.

So there ya have it. The goose is getting fat, and Santa is on his way!
Posted by Stephanie at 10:54 PM 1 comment:

Look what I found:
quilt stuff
You should check out her list of completed quilts on the right side of the blog.

I should write a book: 501 Things To Do In Graduate School Besides Study.
Actually, that's why I need a nap. The last two weeks and the weekend were so busy with school and various other commitments that I feel like I could go to bed right now at 6 pm and sleep all night.

I talked to my advisor today about the game plan for applying to start my Master's Thesis. I need to get my application in within the next month or so, which means settling my topic, my thesis advisors, starting a bibliography and writing a research proposal. This is on top of my 4 upcoming presentations and the rest of my week to week work.

In other news, check out this pretty dress I'm buying to wear in Janet's wedding:

I mean, if one's friends have to go off and get married, at least it's a good reason to buy a nice dress. :)
Posted by Stephanie at 5:56 PM 1 comment:

Hello and Happy Election Day to you all! I'm trying to decide whether to get up in the wee hours of the morning to watch returns, or assume Obama wins and sleep to a normal hour (but not a very normal hour, cuz I have to work at 7). It's a lot more fun to watch returns with someone. In Reinach tonight, some english-speaking girls, about 14 years old, boarded the tram near the international school and were talking about who was staying up all night. It was two Brits and an American, but I think the American has lived here a while. She rolled her eyes and said that so-and-so's parents "who are super american" are having a big party tonight "so they can all cheer to death."

In November 2004, I was a super senior at Fox and was taking a course on Presidential Elections. The class met at 8 in the morning, and I was always flying out the door of Kershner House at 7.55, just at the same time my friend Paul was running down the hill from the Lewis Apartments for the same class. Neither of us ever managed to eat breakfast before we got to class, but I usually had an orange on me, and he often had a candy bar, so we'd tiptoe into class late (though not inconspicuously, because the doors were at the front) and split our fruit and chocolate evenly.

We kept "political journals" in that class. I was sorting through old files this summer and found it.

November 2, 2004
Election night, starting at 5pm…(dun da dun dun…that’s a drumroll, if you couldn’t tell) [I really wrote that and turned it in just like that! My other "journal entries" contain similar nonsense...My teacher probably thought I was nuts!] Exit polls show Kerry in the lead, but I predict Bush will win with Florida and Ohio and all the usual states…and the ones he carried in 2000. I think I estimated his electoral count at 296 or something like that, but I can’t remember for sure. Kerry will take Penn., I think…and probably Michigan and Minnesota too.
We shall see… I’m watching returns with Joe, Paul, and Sam, and the rest of my house. Sam’s the only democrat…he’s being very quiet right now…but when he does talk he says 'it’s not looking good, friends.' Indeed it’s not. The station just called Florida for Bush, and Paul and Joe are leaping around the room hugging each other).
Posted by Stephanie at 10:56 PM 5 comments: