The Best Loved Chameleon in Zambia

I know I told some of you this already, so I'm sorry if it's a repeat. On Sunday I went to church and was invited to join a few families for lunch afterward. I met a Swiss family. They found out I was looking for a place to stay, and even though they have guests coming soon for a month, they said I was very welcome to move into their guest room until then! By that night I had moved my things and was tucked in under a mosquito net in their house, listening to the crickets and thinking, "maybe I am too quick to trust people..." But, nah. I think not. 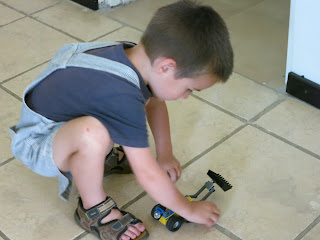 I've really enjoyed their kids. Six year old Timon and I were off to a good start when he spontaneously began calling me Auntie Stephanie on the way home, and we were definitely friends by the time he lassoed me and tied me to a chair and informed me I wasn't allowed to escape. Ok, I said, but if I was going to be a prisoner, could he please bring me a glass of water and something to read. He dutifully went off to get those things, and I slipped the ropes and hid in the corner to see his surprised face when he came back in. :) Now I'm obligated to admire paper airplanes and lego helicopters and sit by him at dinner.
Levy is three, and he is also a fan of legos. We browsed through a backhoe and heavy (lego) equipment catalog, and he's shown me how the bucket on this particular vehicle works. 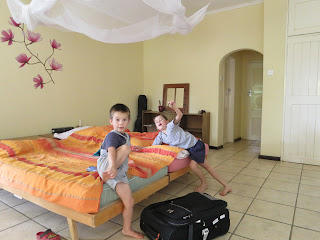 The boys come barreling down the hall as fast as they can, take a flying superman jump to land on my bed, and ask, "Auntie Stephanie, are you done working yet? can we play a game?" 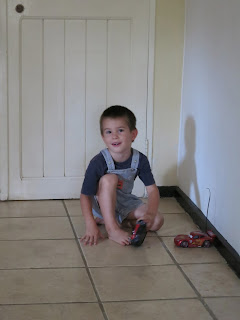 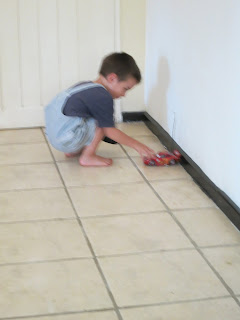 Levy is a Lightening McQueen fan. :) I watched Cars 2 for the first time. 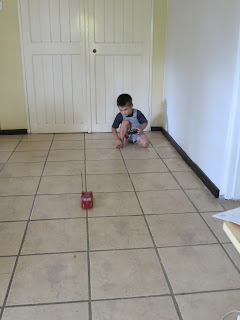 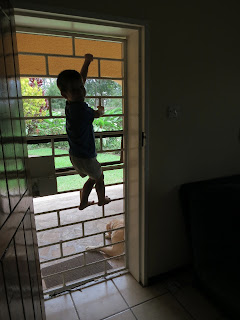 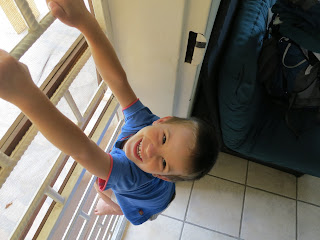 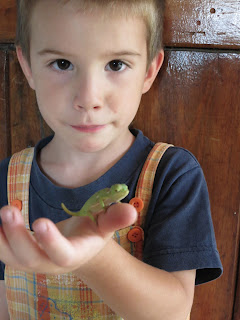 Levy loves this baby chameleon--so much so, i'd say it's hands down the best-loved chameleon in the country. He has to wash his hands at least twice before every meal, because after washing them the first time, he forgets he's supposed to sit down for food and picks up the chameleon again. He wanted to let it sleep in his bed tonight, but his mom said absolutely not. This afternoon, I said, "Levy, does your chameleon have a name?" "Yeah," he said. "Chameleon." "Hmm." I said. "Maybe he needs a real name. Would you like it if we just called you 'boy'? What about calling the chameleon Henry?" No, he didn't like the name Henry, he said, but he seemed to see my point about names. "how about a more Swiss name then? What about Hansruedi?" 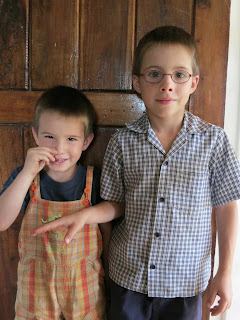 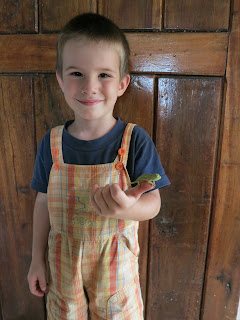 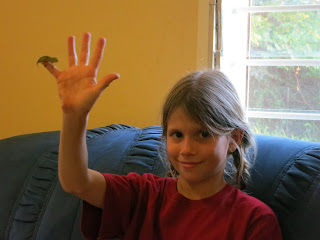 Tabea says she hopes this chameleon really is a boy. Otherwise, we're thoroughly insulting her! :) 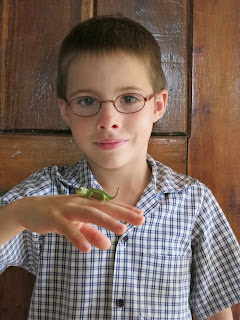 Posted by Stephanie at 11:27 PM No comments:

Hello from Zambia! I'm back in the warmer temperatures working on this water technology research again. I know you're all surprised to see a blog post, but I've decided to try to restart this while I'm here in Zambia. I'll try not to write only about work.

Last year when I went to Zambia, I came straight from a weekend in the mountains learning to ski. This time, I've also come straight from the mountains, but I wisely left out the skis this year. My friends Dave and Janine were getting married, so instead of skis, I took sassy high heels and a pair of white snow boots with furry tops (so fun!) and spent all afternoon and evening switching between the two any time I went inside or outside. "Snow boots with a dress?!" I can hear you asking.  I really think the fur made it work. :) So inside it was grey suede heels, and outside it was white fluffy boots. Here's a tip though: don't wear a dress shorter than your coat. It makes one look a teensy bit trampy. Here are a few pictures from the wedding weekend: 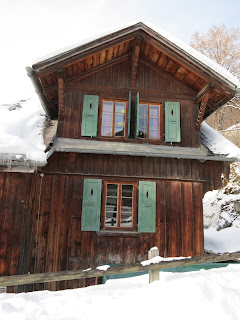 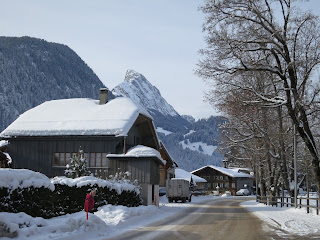 Saanen, Switzerland. Just up the valley from the famous Gstaad, where fancy folks vacation. 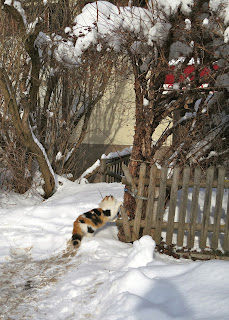 I met a cat at the hotel. 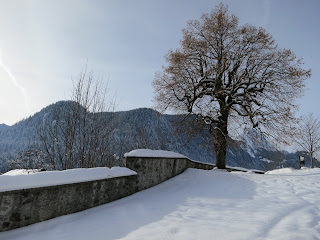 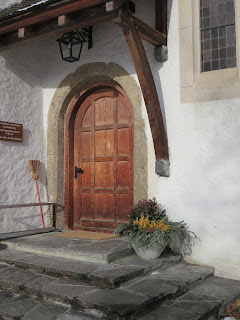 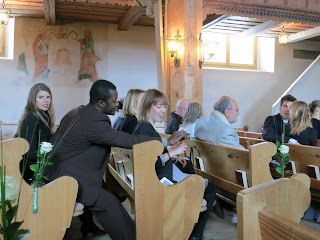 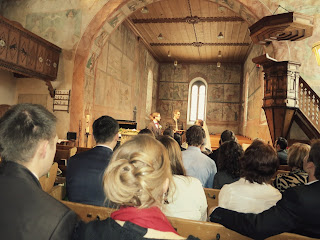 I didn't have the best photo-taking location during the ceremony, unfortunately, but you can kind of see the inside of the church here. 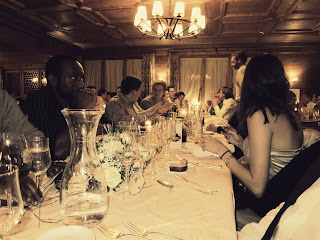 Five course dinner at the hotel! Did you know that those curvy knives that look like mustaches are fish knives? I thought they were butter knives. Luckily, I was across from a classy Austrian who set me straight about my table knife etiquette. 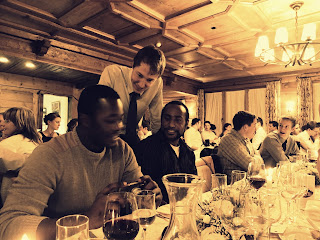 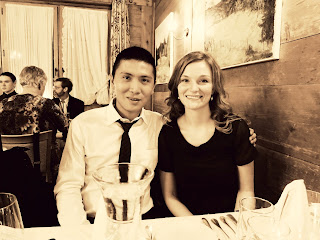 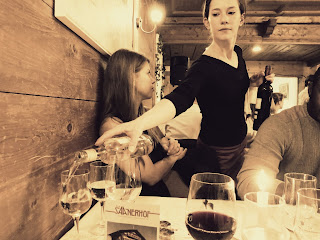 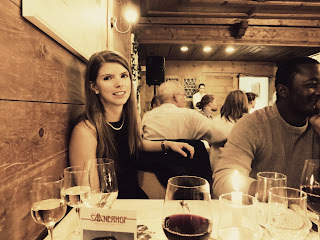 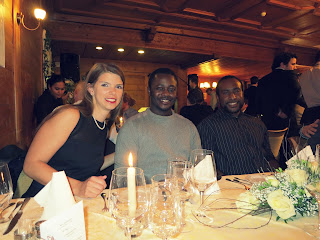 I was seated in the Tropical and Public Health Institute corner. 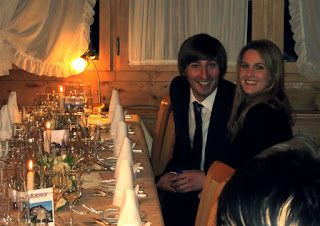 Ed and Eva. They were seated in a German-speaking corner. 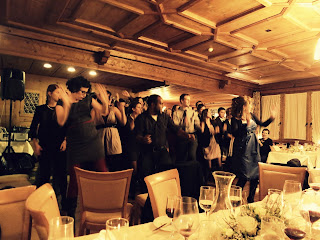 "flash mob" dance at the reception. Most of the dinner guests practiced this line dance between the first reception and the dinner as a surprise for Dave and Janine. While they were learning that, I was riding in a horse-drawn sleigh with the bride and groom to their next photo location, holding a plate full of snacks for them, while Raph kept the snow at bay with a giant umbrella. 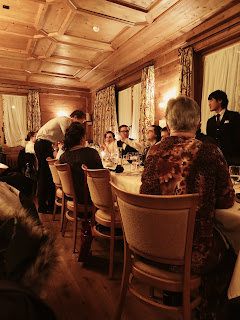 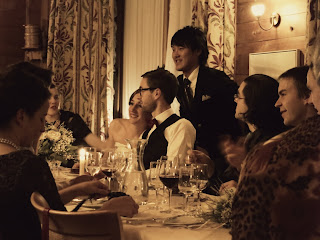