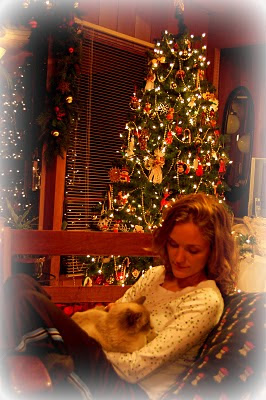 I'm supposed to get fingerprinted today as part of my clearance to work at the school (where I've already been working for a week, I might add). I had my fingerprints taken by the same Sheriff's Office about five years ago, but apparently, they don't keep them! Here I've thought these five years that I had missed my window of opportunity to start my life of crime--that if I ever did anything criminal, the Sheriff would just look me up in his database by my prints (which I'm pretty sure I'd be stupid enough to leave at the crime scene for him). Well! Apparently, I was mistaken, and shouldn't rule out crime just yet.

In other news, I graduated from college 6 years ago this week.
Posted by Stephanie at 6:14 PM No comments:

I'm re-reading The Canterbury Tales, because "Chaucer's heroes regard love when it comes upon them as the most beautiful of absolute disasters," and sometimes that jaded perspective just hits the spot best when it comes in 14th century rhyme.

"I'd like to warn you; it is no child's play
Choosing a wife. It needs consideration,
In fact it asks a long investigation.

'Is she discreet and sober? or a drinker?
Or arrogant? Or, in other ways a stinker?
A scolder? Or extravagant? Too clannish?
Too poor? Too rich? Unnaturally mannish?"
Posted by Stephanie at 6:06 AM No comments:

Last week I thought that Brian had taken to calling me "Howard the Un-hirable" when I came home from a job interview to that greeting. After a couple days it came up again and he said he didn't call me Howard--he only asked, "How're the Un-hirables today?" By that time I'd spent two days wondering why I didn't at least merit a more feminine name, like Henrietta or Harriet. It doesn't matter anymore, however, because I got a job.

Actually, I got two. I was selected for an internship with Mercy Corps. I'll be working on expanding their partnerships with global universities to improve their ability to recruit interns with highly specialized skills. That job will start next month.

The other job I got is a position tutoring reading at a grade school. Three first-graders and two kindergartners, all Spanish speakers, and I sat at a little table for an hour and a half this afternoon reading stories, practicing same/different concepts, colors, shape names, and learning about "sequence." I hope some learning occurred, anyway. There are several challenges with this group: the fact we meet after school; the fact they speak Spanish and I have to remind them to speak English; the fact that it's four wiggly little boys and one very silly, equally wiggly chatter box little girl; the fact that they basically don't know their letter sounds yet. The first graders know some sounds, but still take the "throw out random guesses" approach if they try to read. After meeting them today, I think I'm going to have to find resources for strategically teaching phonemic and phonological awareness skills (check out my happenin' new lingo!)as if they haven't had it before. I also was reminded how NOISY five and six year olds are, even when they think they're being quiet! It's like they don't even notice that animal sounds and humming and beat boxing is coming out of their mouths, even though they just very correctly and very sincerely told me that one of the rules is that "we work quietly."

It was an ok first day, I think, despite the gleeful use of Spanish potty-mouth words (they know I don't understand). Christian is having trouble remembering my name. He says, "Miss..uh..miss...hey, teacher! teacher! I'm done!" The first thing he said in class before he even unpacked his snack was "Read us a story!" That's a good start for a reading group! He also was caught climbing the stalls in the boys bathroom on our break, and his feelings were a little hurt by the (harsh!) scolding he got from one of the guy teachers. Gilberto follows directions well, when he understands them, but when he's in Spanish mode it's hard to get his attention. Saray says her dad builds ships, too, and enthusiastically said "YAY!" when I said I'd be their tutor from now on. Alejandro is as sweet as they come, and wanted me to draw him a duck, then a tiger, than a snake, as part of his story about the duck visiting the snake's planet. Gustavo, who their last teacher said "likes to be contrary" gives articulate answers when asked anything directly, and otherwise acts like he has better things to be doing than sitting in some stupid reading class. He also runs in the hall as soon as he's out of sight, makes funny faces almost constantly, likes Jack and the Bean Stalk, and overstays his turn at the drinking fountain while the other kids chant, "One banana, two banana, three banana SPLIT! Hey! You're supposed to split! We said split! Teacher, he's taking too long! Hey! He's drinking it all! Hey, he got too many drinks! Teacher!'

Oh, grade-schoolers.
Posted by Stephanie at 4:28 AM 3 comments: