Five more days until our relay triathlon in Gérardmer, France. Do these guys look tough or what!?

I'm the runner for my team, and our team name (thanks to me and my big mouth) is "Faster than you can say Jack Robinson." I suggested it at the beginning of the summer when I still had plans to run four times a week, and when I was busy trash talking a team of French guys I sort of know, suggesting that they be prepared to be left in the dust. As it actually happened, though, I think I ran about four times all summer, until precisely 9 days ago when I decided I should hurry up and train. So, I've been running a lot and man! I'm tired! I haven't slept so much in months. On the up side, there is often an old man practicing his Alp horn in the evenings when I run along the Wanderweg toward the woods that divide Pfeffingen from Ettingen. His songs make the evenings sweeter in my neighborhood. I also just found out that the French dude I needed to outrun got hurt (which I was sorry to hear...really, I was), and since I don't feel the need to outdo anyone anymore or live up to any fantastic claims I might have made in June, the pressure has really let up. I could walk if I felt like it.
Posted by Stephanie at 10:52 PM 6 comments:

Not much time to write, but some pictures from the weekend: 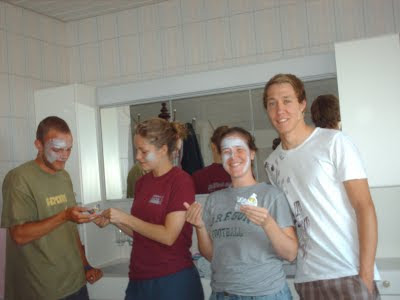 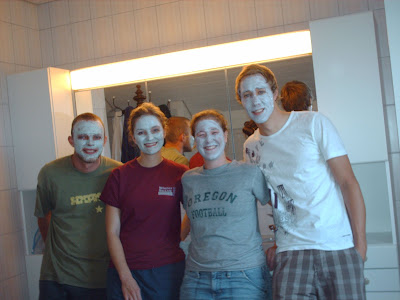 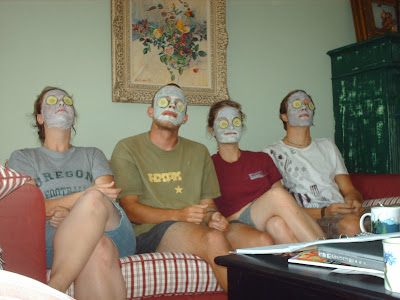 These guys plus Ed picked me up Friday night after work and we went miniature golfing in a nearby town and then back to Raph's house, where we all were staying. Saturday sometime after facials, we decided to float down the river, so we piled in the car and zipped over to Mumpf, where we left the car, hopped a train back up river to Stein, where's there's a footbridge that's fairly handy for jumping. (Video plucked from the internet so you can see the bridge. There's stuff on Wikipedia too. Sorry, I don't have pictures from where we jumped, but...it's about 10 seconds into the video. We climped over the railing on the right side.)
. I just learned on the trustworthy information site known as youtube that it is the largest covered wooden bridge in Europe. It was my first time jumping off it, and see mom? I lived. We swam across the river to Germany (which in retrospect was kind of silly, considering there was a perfectly nice bridge there) and then back across to Switzerland. In other interesting events from the week, Aubrey asked Raph about his observations from his trip to the States, and among other things, whether I was any different at home than I am here. He said I smile a lot more at home. Y'all must make me happy. :)
Posted by Stephanie at 11:00 PM 12 comments:

If you were a sailboat, I would sail you to the shore

Howdy friends. For those of you who don't know, I'm back in Switzerland and have been for two weeks nearly. I have a temporary job working in a department store distribution warehouse. I unpack, sort, and hang up clothes for the stores. Pretty exciting, I know. I've been there a week thus far, and although it's not the most compelling work I've ever done, it's good to have a job and the days go surprisingly quickly. Besides that, I work with a group of lovely girls and it's been a pleasure getting to know them a bit this week. I work across the table from a Swiss girl named Ilenka, who just finished highschool and is excited to be going to California and South America soon. There's a French girl who is studying to be a nurse and who speaks about as much German as I do, seems a bit shy, but makes funny faces if things go wrong. I think she'd be fun to know if we could talk a bit more. There's another Swiss girl named Lila who is getting ready to move to Holland to study illustration, and she's nervous about moving to a foreign country where she doesn't understand the language. We talk about what she should take, what she should buy there, and the fact that she'll make friends in short order and will be fine. Yesterday we discovered Raphael is a mutual friend; she went to school with him when they were 14. Oh, and Ilenka and I know some of the same people too. I think meeting new people in a foreign country and discovering you have mutual friends is a whole new level of home, and I like it. On Monday when Raphael thanked God for our food and my job, he prayed I'd make some new friends at work. Nice that God gives friends on top of work and food.

Know this song? I read that the girl who sings it thinks "that a lot of love songs tend to deal with the fluffy nice side of love, but this one deals with how you get very selfish when you fall in love with someone, and you don't want to share them with the world, you just want them all about yourself. What's genius about Mike's lyrics is that instead of saying that directly he uses these crazy strange metaphors, "if you were a piece of wood I'd nail you to the floor" and quite bizarre stuff and I like that. Musically it sounds like a really nice smooth love song, but the message is pretty intense and quite dark." I disagree about the dark part, and I might tell you why later, but I'm STARVING at the moment...so, I must be going. :)
Posted by Stephanie at 3:22 PM 3 comments: