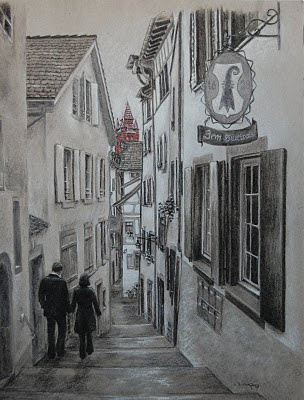 I know some of you are thinking, "Wasn't she 'almost done' with this one months ago?" Yup. It's just that "almost" often ends up being a more elastic state of being than I wish it were. I had some persistent trouble areas, but I resolved most of them and thought of some additions that I am pleased with.

It's on its way to Richard Nixon.
Posted by Stephanie at 2:27 AM 4 comments:

New songs on the new guitar

Brian is teaching me a few songs on the guitar. Today we worked on these three:


Flake isn't my favorite Jack Johnson song, but it's the one Bri knows...so that's why I'm learning it.

Daphne Loves Derbey, "Pollen and Salt." Every time I tried to remember the name of this song I could only think about sea salt and vinegar chips. "Think Daffodils and the Ocean, Steph," Brian suggested. et voila. Pollen and Salt.

Posted by Stephanie at 9:48 AM No comments:

wi-fi in the wilderness

Mom and Aunt Heather and I are painting in the Mt. Adams wilderness this weekend with Eric Jacobsen. Turns out the modern wilderness has free wi-fi. 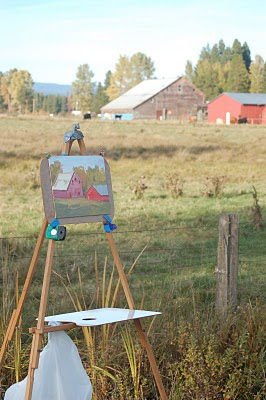 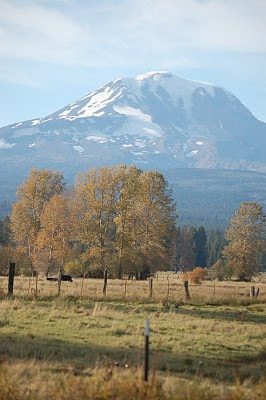 Posted by Stephanie at 4:10 PM No comments: 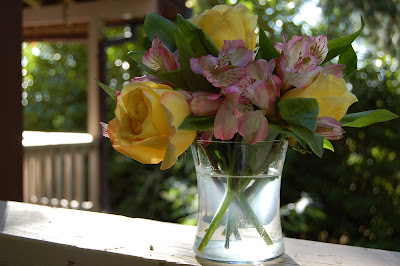 I was surprised and delighted last night when I got home to find a box of flowers sitting on the porch waiting for me. :) A thoughtful guy sent them.

I'm off shortly to paint in the mountain wilderness all weekend. bis nacher.
Posted by Stephanie at 7:29 PM No comments:

Two pairs of barely-worn Goodwill shoes, and a beautiful balcony! 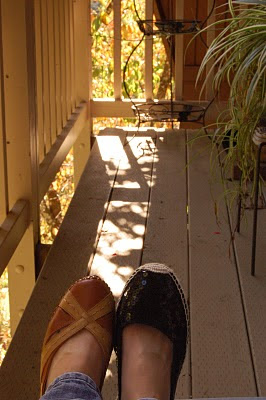 I'm enjoying October from my flower-lined balcony this afternoon while I whittle away at my long list of outstanding obligations, emails, applications, and ideas.
Posted by Stephanie at 11:23 PM 8 comments:

My last few days in Switzerland were filled with lots of packing, drawing, and some fun times with friends (typically immediately followed by not fun goodbyes). I enjoyed a long and leisurely lunch with my friend Marianne in the garden at her house in Pratteln. I went to M1's 7th birthday party, where her grandma asked if I was leaving Switzerland "für immer" (forever). I hope not. M1's Great Aunt Friede said not to worry, I'm young and can come back. It would be different if I was as old as she is and leaving. :) True, I guess. I wish you could meet Friede (I talked about her once before in 2008, here.) She's the younger sister of the girls' grandma, and she lives close enough to come over every Tuesday afternoon and evening to watch the girls, so we've spent a lot of time together. We watched the inauguration together, and she cried as the new president was sworn in. She thought it was such an important and promising turn for the world. She's calm and consistent with the girls, and lets them tie a rope around her waist and pretends with them that she's their horse. I hope I'm that much fun when I'm 70 something! And she's honest about what she's thinking and worried about. She's a bit pessimistic about the world, but talks about prayer sometimes--last week she was telling me about some of the difficult things her family is dealing with right now and said we often think we need to do this or that to make things happen and in the process forget to entrust our lives to God's hands. Timely words for a jobless, directionless 25 year old about to move half way around the world with no clear idea of what she ought to be doing next!

After M1s birthday party I hustled off to Claraplatz to meet Raph for a mystery going-away-present-event (the sort of going away present I wouldn't have to pack), which turned out to be a Mya Audrey piano concert with a couple of his friends. I am increasingly a fan of event/together time gifts. They've often been my favorite gifts (besides Tinkerbelle, of course, who is my all time favorite birthday present).

Friday night before I left I had dinner at the Reinle's...and got to pick my last meal. :) I think if Barbara cooked up enough Alpine macaroni with apple sauce for Israel and Palestine, they'd be so happy and content with the world they'd become friends on the spot. Of course, it wasn't ACTUALLY my last meal, because I stuck around for breakfast Saturday morning. There was already a fire crackling in the fireplace when I woke up, and I don't know whose idea it was to keep the marshmallows in the same cupboard as the coffee cups at their house, but as I went to make myself a cup of coffee, inspiration struck. S'mores for breakfast! 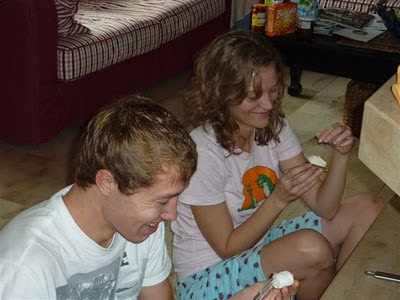 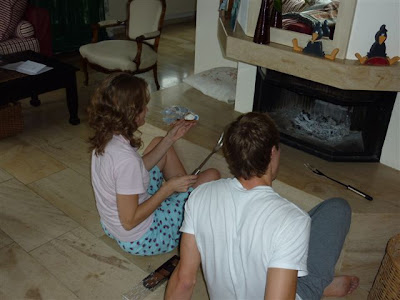 I went to the bookstore the other day to look for a book by the (late) Ghanaian theologian Kwame Bediako. They didn't have it. So then I asked for books on monitoring and evaluation in humanitarian organizations, and they didn't have ANY books on that! none! and that's a huge topic. Bookstores these days. But back to Bediako. He's great. He's one of the authors I read in preparation for my MA exams on the history and anthropology of Christianity in Africa. More on him soon, but here's a sneak peak, as an introduction. He's speaking here about the unity of the church, but the article I read and found so interesting was about the public role of African Christianity in the 21st century. Enjoy this little clip for now.