Hi friends! A very short post to say I haven't entirely abandoned my blog, and to tell you about the funny things a person might see in Switzerland. You know those bicycle bells that people use to alert slower travelers in front of them that they're coming through? Bells of this variety: 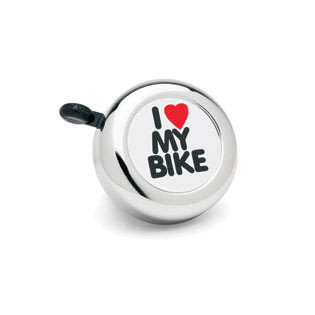 Last week on the bus I saw an old man with a bike bell like this one attached to his cane. His said "I Heart Switzerland."

As usual on the job front, when it rains, it pours. I've been busily working away at editing a PhD history thesis on gender in Namibia--thinking about things like the expansion and collapse of Oorlam socio-economic hegemony in Kaoko, and the implications of the raiding economy. To finish the paper on time, I need to finish 20 pages each week day for the next couple weeks, which is several hours of work each day. It looks like I might also get a 400-page project, or part of it, but it has to be done in the next 10 days! Why would anyone wait to find an editor until 10 days before the deadline...that's nuts. But good for me. However, it does mean 60 pages of editing a day, and that's a lot of focused reading time. Interesting thing about me and editing: when I'm tired or getting tired of it, I have a really hard time thinking of nice and constructive ways to suggest changes. I want to circle things and write "THIS IS STUPID! DON'T DO THIS!" which, admittedly, isn't very helpful.

Anyway, thought you'd all be pleased to know I've been a busy bee over here. I'm also trying to sell a couple paintings (the two small landscapes I posted ages ago...this one and this other one ). They are currently down the road in Reinach getting mounted and and matted in a lovely off-white. So, if you want to buy one, speak up! I should say both of these were exercises I did based on another artist's work as a way to learn how to use a new surface and softer pastels. So they aren't "original" in the sense of being my own concept or composition, but naturally they aren't just like the sources I based them on either.

Friday afternoon I took the girls to see the pigs and then on to the play ground just for fun. M2 has just learned to ride her bike without training wheels, and she peddled over there. She even rode the downhill parts, holding the handbrake reeeaaaaallly tight and periodically saying, "see? I'm not scared." She hopped off every now and then to pick up pine cones for me to hold. I scratched the pig's back with one of them and accidentally dropped it in the pig stall. She was offended, but graciously only said, "ok, now don't drop any others!" While we were standing there, she said, "Listen! The chickens are making music!" and when I listened, the yard full of hens pecking, scratching, and quietly talking did sound a bit like a song. M2 notices things like that.

At the play ground, she zipped around on her bike, showing off for the twins from her playgroup who happened to be there too. They still have training wheels on, and were duly impressed. M1 and I played tag (which M2 tried to play with us, but she got mixed up about whether she was being chased or supposed to be chasing, and she didn't like getting tagged. She went back to her bike). M1, on the other hand, was not mixed up, and she is FAST! She's also a great sport, whatever position she is in the game. She generally is bubbling over with the joy of life, no matter what she's doing. She and I played "versteckis" (hide and seek) after tag. The playground is very small and there aren't very many good hiding places, but one time when she was counting I scurried up the play structure and laid down on the top platform. I was in plain sight, but you know how little kids forget to look up (so do robbers, I've read, so keep your valuables up high). It took her ages to find me!! The other little girl kept yelling, "I know where she is!!" and her mom would holler back, "You don't tell!"

When she found me, she scrunched up her nose over a huge smile and said "grrrh!"
So fun. :)
Posted by Stephanie at 10:34 AM 2 comments:

Kris Kristofferson is playing in Basel next month with Rosanne Cash. Tickets are 110 francs, which is disappointing. I'd go if it was cheaper. Like...if they were 20 francs. :) I'm gonna work on it though. Maybe I can think of something. Make friends with the sound crew, for example...

I recently learned that he wrote the song Sunday Morning Coming Down, which I really like, even though I know about half of you will think it's sad and depressing. It's been on my rotation of Sunday Morning pre-church music for about a month now, and usually I only do Hymns on Sunday morning--a little tradition that my friend Joe and I both enjoy. But I think Joe would agree that an exception could--should!--be made for Kris Kristofferson, particularly since the song is so aptly-titled. Here he is singing it a few years back with Johnny Cash.

And yes, in case you were wondering, I canned my pears. They're very purty. :) Here's hoping I don't die of my own home food-processing experiment!
Posted by Stephanie at 10:39 PM No comments: