As promised, a few pictures from my time in South Africa.First, my thatched-roof room in Midrand: 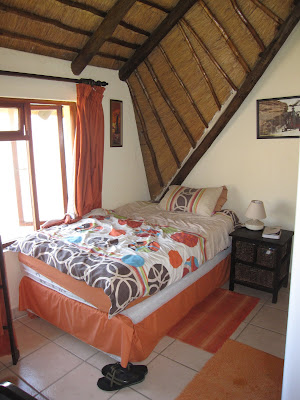 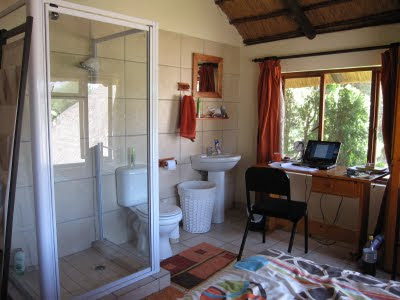 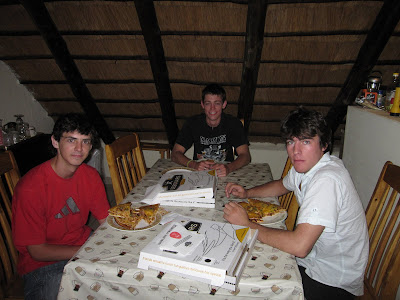 Pizza night! Hanging out with the roommates. I don't have any pictures of Martin. He left after the first week and wasn't around much the week he was there. 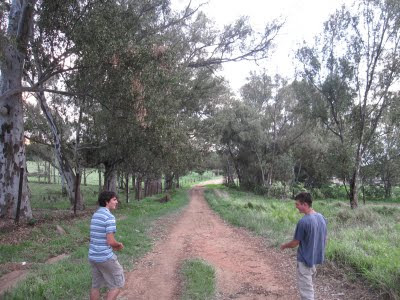 On a walk with Schalk and Anthony. This is along the running route we normally took. Shortly after this they got tired of me taking pictures of trees and flowers and tried to confiscate my camera until we got home. It didn't work. 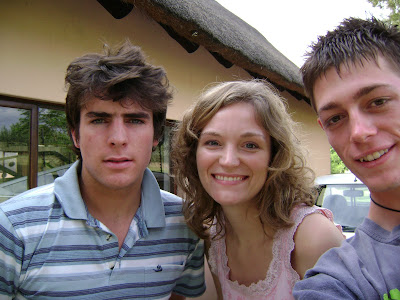 Schalk from South Africa on the left, Anthony from Zimbabwe on the right. We took these the night before Schalk left, despite his protests that he hates having his picture taken. Schalk is a farmer from near Bloemfontein, where his family has a 1000 head of cattle and run a game farm. 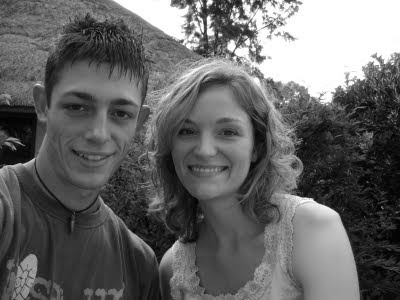 Anthony doesn't mind having his picture taken. He's also a very talented pen and ink artist. He had two great drawings there at the house, one of a crocodile's head and one of a lizard. We're going to do a drawing swap sometime this next year. Pretoria, from in front of the Union Buildings (Capitol buildings). 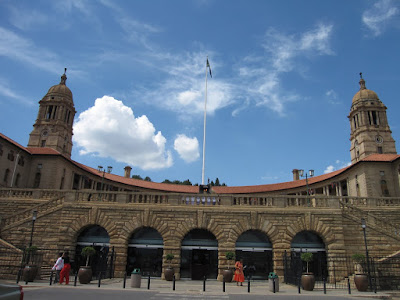 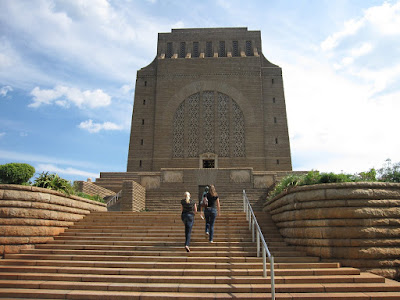 Voortrekker Monument. You can read more about the monument here 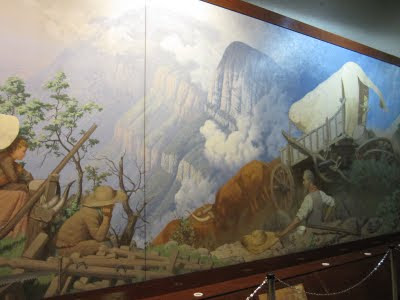 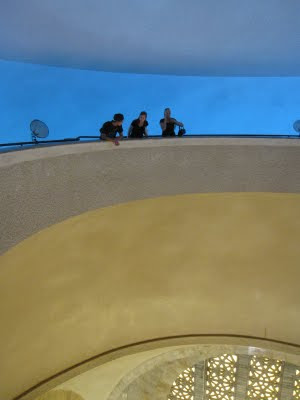 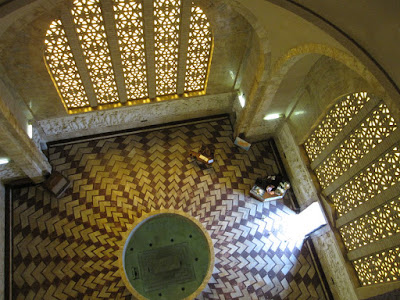 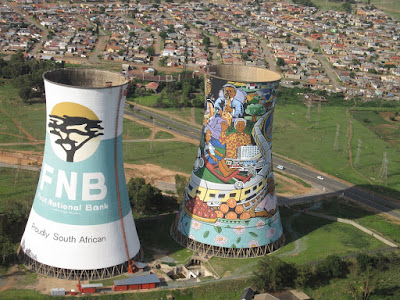 If you look very closely, you'll see there's a bungee jumping platform between these two towers. 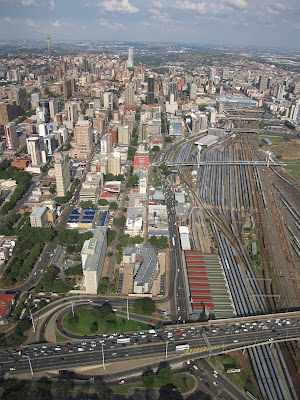 Flying over it at low levels is a great way to see the city, but I can't remember where this was. I think it was maybe Pretoria...could have been Johannesburg too though. 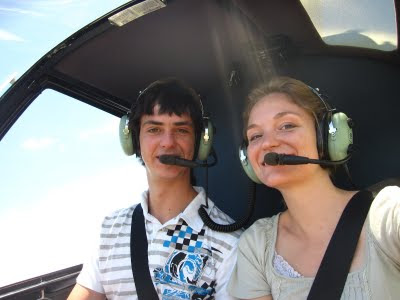 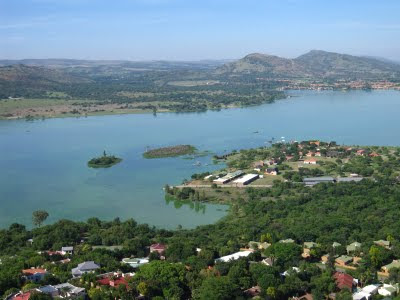 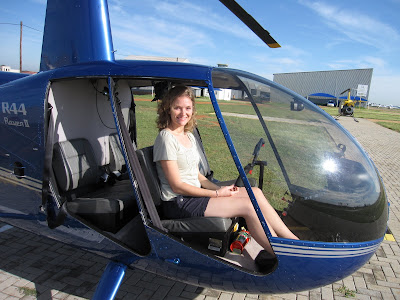 That's a R44 you're looking at there, folks.

Safari:Amanda and I enjoyed a drive through Pilanesberg National Park on Saturday. Here's just a few of the pictures from that excursion. 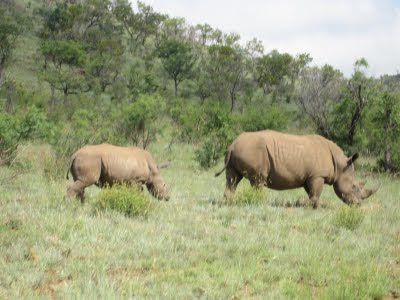 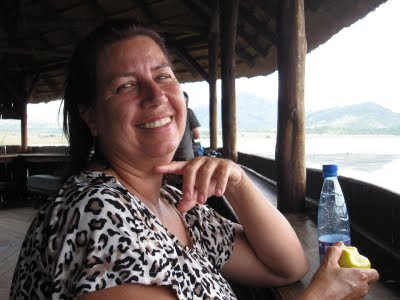 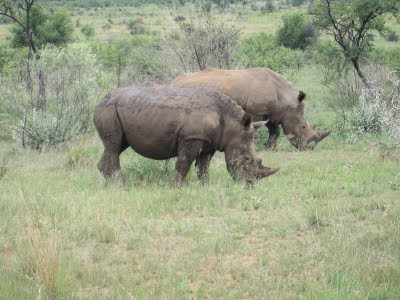 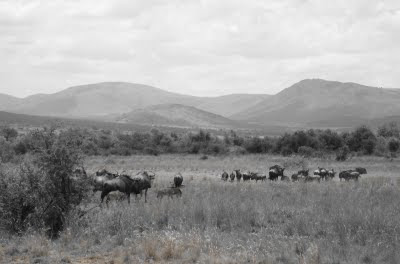 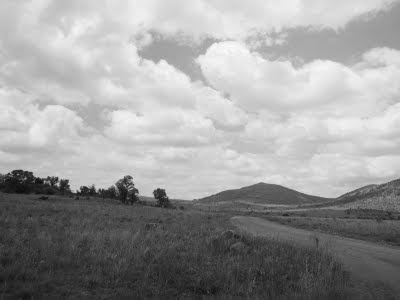 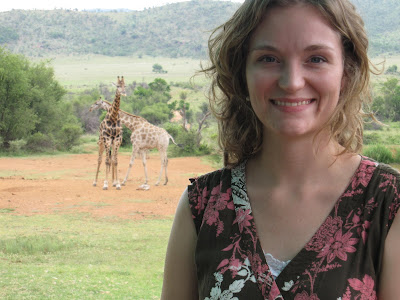 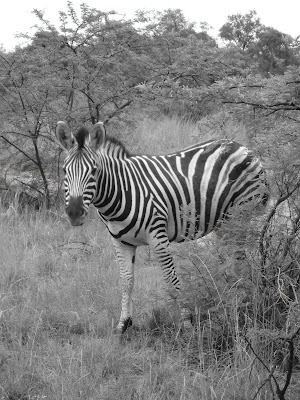 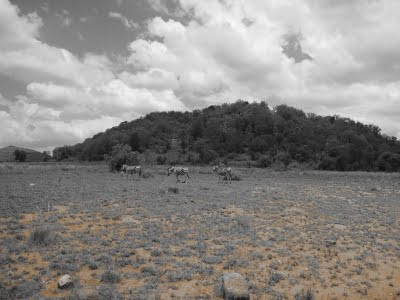 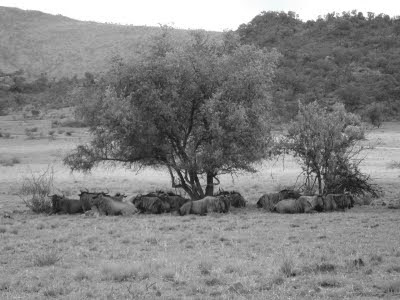 I'm sitting in Dubai again, headed home. My first flight had half the world's population of professional rugby players on board...The Scotland team, the US team, the French team, the Russian team, the Portugal team, and a handful or so of guys from the New Zealand, British and Irish teams, just to name the ones I was aware of. Two things about the lot of them: first, in general rugby players have a lot going for them, but the Portugal team...they have a LOT a lot going for them. Second, Rugby players are humongous. They don't look so big on TV (hard to believe, I know, but I have in fact watched 2 Rugby games on TV since moving to Europe. That's a rate of one game per annum), but standing in a crowd of them, I felt extremely petite even though, as you know, around ordinary mortals I'm average size. And yet somehow, even with all those giants in Economy class, Steph got a bulkhead aisle seat. How fantastic is that! Best cheap seat on the whole airplane. The trade off was that my Paris-bound neighbor was obviously very sick with a fever. I hope I don't get that.

Saturday I went on a mini safari at a game park in the North West Province. We saw a lot of animals, and even though I had kind of thought, "see one rhino (or zebra or giraffe) and you've seen them all," I really enjoyed driving through the bush and finding animals that were out wandering about. It is nicer than the zoo. I'll put up some pictures when I get home.

Gotta go. More soon about my trip.
Posted by Stephanie at 4:10 AM 2 comments:

9 days left and a bundle of nerves

I am officially nervous about my presentation on the 18th. I opened the email with the schedule a half hour ago and my stomach has been doing cartwheels ever since. Thankfully I'm scheduled in the afternoon and after Lukas' presentation; I hate going first. But still...! What am I going to say for fifteen minutes?! and there are a bunch of smarty pants people who are going to be there too, and I know they'll ask me long-winded, confusing questions that I hadn't thought of.

Not knowing what to say reminds me that Schalk and I were talking the other night about a TV program in South Africa that finds wives for farmers. His family says they're going to enter him as a contestant, and he can't think of anything worse. In the first round the farmer has five minutes to talk to each lady candidate. I thought that was pretty short, but he said, "jo, that's sooo long! What would I say?" Schalk was in residence at a boys school from the first grade. I think that might have something to do with it.

Joshua left yesterday for Phalaborwa and Schalk headed back to Bloemfontein today, so our fun little apartment is down to just two. I won't know what to do with myself when I go home and have nobody to throw gravel at me, put rocks in my hood when I'm on a walk, hide my drink, pull my chair out from under me as I'm sitting down, mess up my hair, point out "no pets allowed" signs and suggest I wait outside, or make jokes about my intelligence all day long.

Of Helicopters and Spring Boks

Just checking in quickly to say that things are going well here in South Africa. I just got back from a 1.5 hour helicopter ride with Joshua, one of the guys I'm staying with. That was my third flight since I've been here. I was warned ahead of time that the first ride in a helicopter can be a bit scary, so I was ready for it. But yesterday we took a Squirrel(I think that's it's real name?), a sort of medium sized one with room for 6 people, and I thought it was great. Didn't find it a bit scary. When I got home the guys asked me if I'd been in the something-something model (as if I'd know). I said it was silver. They said, "well, c'mon, what were its call letters?" Beats me, I said, so they showed me pictures of different choppers until I could identify it. That's the only reason I know it was a Squirrel. It was pretty cool to see Johannesburg from the air, including the World Cup stadiums that will be used next year, and famous former townships like Soweto.

This morning we took a smaller helicopter, which I think made it bumpier (or maybe it was cuz it was a student pilot?). I don't know what model it was either, but I can tell you it was blue. And there were no doors. I could have fallen right out of that thing! It took me a few minutes to relax, but once I did it was fun, even though as I was shivering in the back, the guys up front were like, "oh, it's so nice up here without the doors...what a nice breeze." We flew out over a dam which was beautiful and reminded me of Lake Como in Italy, except that the water was polluted. We went over some neighborhoods of HUGE houses with tennis courts and pools in their yards, and then over neighborhoods not far away that are run down, patched together shacks.

Then this afternoon, Joshua and I took an even smaller one north, past the dam and on to another airport. Joshua is a student pilot, too, and I was his second non-instructor passenger. Schalk, another roommate, was the first, and that was yesterday. I told him after we landed that for future passengers, he might want to edit the words, "Oh shit" out of his vocabulary while he's flying. As far as a non-pilot passenger knows, it could potentially mean anything from, "I should increase RPMs a little--but it's not a big deal" to "there's a Boeing descending and barreling straight toward us." He agreed I had a point.

Next week I hope to go to a game reserve to see some animals, and of course, I'll be busy tying up loose research ends and writing more of my thesis, perhaps doing some interviews, and hopefully finishing my presentation for African History day on the 18th.

Hope you all are well! See those of you in Switzerland in ten days.

(and p.s., mom, I just wanted to add that I checked with the main instructor before I flew with Josh to see if he thought it was a good idea, and he said it was perfectly fine. I just thought you'd appreciate that level of precaution.)
Posted by Stephanie at 12:19 PM 4 comments: