I'm reading Philip Yancey's book Reaching for the Invisible God on the train these days. I picked up the book at Goodwill last summer on a particularly successful shopping trip in Beaverton, where Raph and I got a dress shirt and britches for him, a good pair of shoes, several books, cds, and this shirt with big red dots that I like so much: 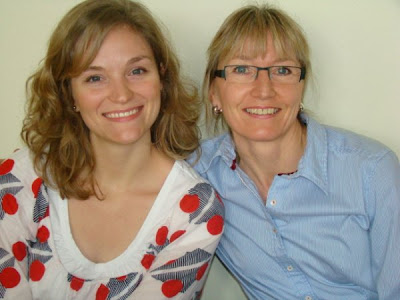 And that's me and Barbara at a potluck two Sundays ago. The photo was taken by my good Ghanaian friend Stephen (below) who calls me "Name" since we have the same name. He just finished his studies at the Swiss Tropical Institute and heads home to Ghana and his wife this week. And that's Diana he's with, but you know her from previous pictures. Anyway, Yancey. He shares this in his book:

I have often recalled the story of a man who came up to me after a speaking engagement and said, rather blusteringly, 'You wrote a book titled Where Is God When it Hurts, didn't you?" When I nodded yes, he continued, "Well, I don't have time to read your book. Can you tell me what it says in just a sentence or two?" (A writer loves requests like that, after spending many months on a book.) I gave it some thought and replied, "Well, I suppose I'd have to answer with another question, 'Where is the church when it hurts?'" You see, I explained, the church is God's presence on earth, and his Body. And if the church does its job--if the church shows up at the scene of disasters, visits the sick, staffs the AIDS clinics, counsels the rape victims, feeds the hungry, houses the homeless--I don't think the world will ask that question with the same urgency. They will know where God is when it hurts: in the bodies of his people, ministering to a fallen world. Indeed, our consciousness of God's presence often comes as a byproduct of other people's presence.

That's your thought of the day.

Also, for those of you I haven't told yet and who may be wondering, "gee, what does she think she's going to do with an MA in African Studies?" (and I know you all have wondered that at some point!), lately I have been learning more about issues relating to access to medicines for African countries, and finding it very interesting. I am looking for ways to build skills and knowledge that could be applied to a job in that area. I have an acquaintance who works on developing access to drugs and health infrastructure in Tanzania, and he's been sharing some resources with me to get me started. It seems like an area of work that's a good mix of regional expertise, business, and communication/liaison skills, and I think I'd like it. Plus, it's highly relevant, especially as countries and organizations continue to pursue the Millennium Development Goals to reduce poverty and improve livelihoods. Access to health care is pretty fundamental.

If you're wondering why I'm writing blogs when I should be writing a Thesis, this was my warm-up writing. :)
Posted by Stephanie at 8:41 AM