Zaccheus, you come down! And the cold war. 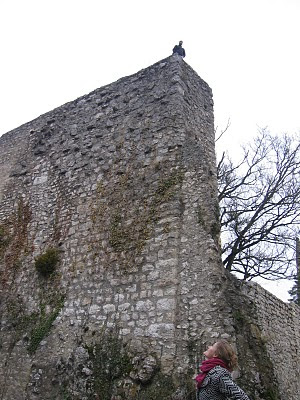 My monkey little brother, climbing to the very highest places in Pfeffingen. 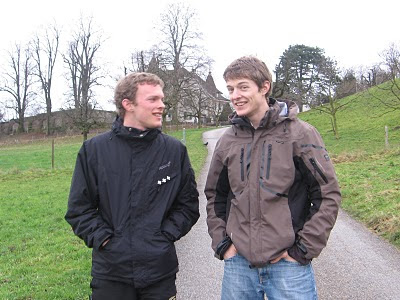 Ben and Dom, on our way to Storm the Castle and conquer the world. They're both kinda making funny faces here... 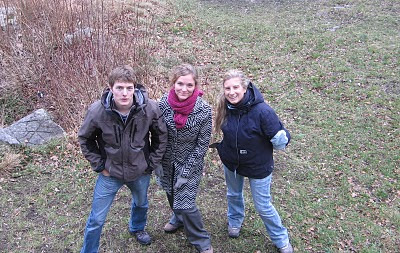 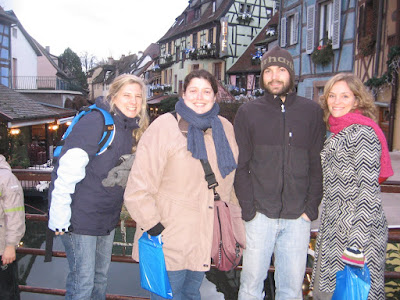 Colmar, France, with Diana, Gina, and Daniel, who was kindly taking the photo. (My, what nice scarves we have, Diana!)

Thanks, Gina, for sharing your pictures!

Good news on the art front! It seems I will have two painting commissions in the very near future. Of all the kinds of work I do, from cleaning toilets to correcting people's sentences to writing executive presentations, this is one of my favorite paid activities.

I'm considering applying to become an Army historian in Virginia at the Army War College. Among other intriguing things about this job, it comes with top secret security clearance. I know people with top secret clearance are a dime a dozen, but still...it sounds cool and entitles a person to read all sorts of interesting things. About half the jobs I'm interested in these days include security clearance, and somehow starting with that subject this week, Valda and I were discussing our relative potential as successful spies. I'd make a lousy spy myself. I'm a terrible liar, and worse than that, I'd probably just open right up and tell anyone who asked what I was doing. Valda, on the other hand, is a "worryingly good" liar when she wants to be, and loves extracting information. We both agreed that to be a good spy, she'd also need to maximize her aura of mystery and wear red lipstick. There's another reason I can't be a spy--red isn't my best color, and I hate the way lipstick feels. After that conversation, however, I got wondering about spies, what motivates them, and what distinguishes the successful from the unsuccessful, and spent an evening watching a documentary on youtube about Cold War spies. None of them wore red lipstick. Lots of them died. (Could there be a causal relationship here??) And as far as I can tell, the high possibility that a spy will be ratted out by someone else in counter-intelligence is the worst part of the job. The documentary is worth watching, though, and includes interviews with US, British, German and KGB people discussing their personal involvement in Cold War intelligence.
Posted by Stephanie at 12:21 PM