Yesterday Richard and I took pictures in Basel, and since i haven't ever put proper pictures of Basel up, I thought I'd post a few for those of you who haven't seen the city. 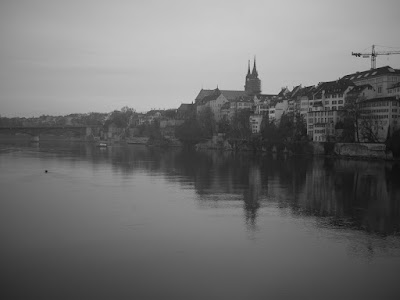 This is the Basel Münster by the Rhine. On warmer days, people float this stretch of river with their dry clothes in a bag, but on overcast January days, there's hardly a soul near the river, let alone in it.

These pictures were all taken in the afternoon, but the early mornings on the river are really nice. I used to have class at 8 am in the second building from the right, where I sat by the window and watched the sun doing it's morning calisthenics each Thursday while the barges slipped up the Rhine. It's a nice place to watch the city wake up, and--oh, heck...how about a Wordsworth poem to help you imagine it:

Earth has not anything to show more fair:
Dull would he be of soul who could pass by
A sight so touching in its majesty:
This city now doth, like a garment wear
The beauty of the morning; silent, bare,
Ships, towers, domes, theatres and temples lie
Open unto the fields and to the sky,
All bright and glittering in the smokeless air.
Never did sun more beautifully steep
In his first splendor, valley, rock or hill;
Ne'er saw I, never felt a calm so deep!
The river glideth at his own sweet will:
Dear God! the very houses seem asleep;
And all that mighty heart is lying still!

Are you feeling the moment now? (Yes, he did compose that on Westminster Bridge, but I'm sure he would have said the same had he been standing on Mittlere Brücke). 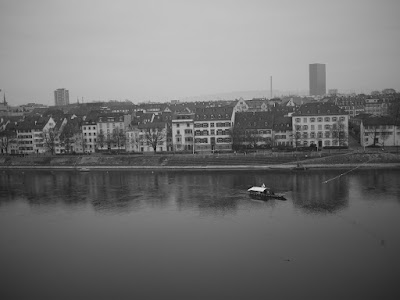 One of several Ferries. That's Klein Basel on the opposite bank. 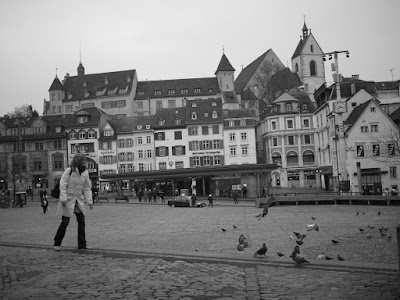 Steph Chasing pigeons at Barfi...I was trying to encourage them to fly for the picture. Uncooperative little so and sos. 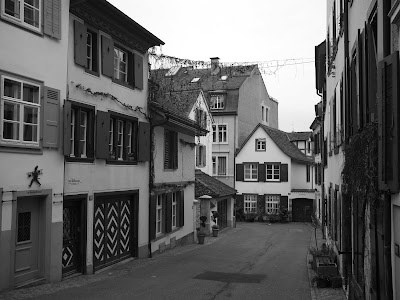 A street in one of the older parts of town. 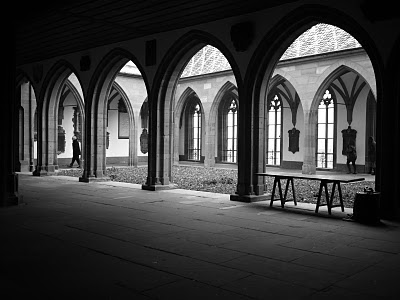 Arches in the cloister connected to the Munster. 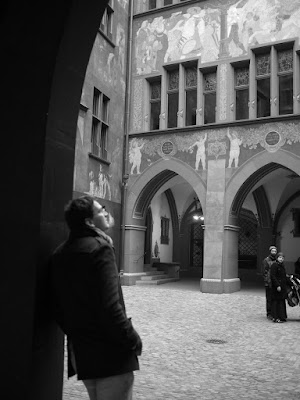