Those braids in the header are my morning handiwork. I started work earlier than usual today at 7, because M1's two week spring break from Chindsgi starts today and their mom had to leave for a teacher in-service retreat. The girls were going to the zoo with their grandparental units late morning, so my first couple hours were spent finishing breakfast and getting them ready. Our hair session went like this: I asked M2 if she wanted her hair done. No, she said. She did not. M1 said she wanted hers done though, and that changed M2's mind in a hurry. M1 tried to assert the "me first" rights of being older (very diplomatically, I might add, as older children often do). So we had a quick chat about thinking about others and letting them go first sometimes too. M2 was therefore first on the stand. She wanted pigtails, and they were a perfectly satisfactory pair of pigtails until M1 had french braids. After that, pigtails just wouldn't do at all, so I re-did M2's hair to match M1. The whole event took a half hour at least. Then we talked about hippos. And monkeys. And read a couple books. And rode bikes and played badminton outside.

More word trouble this week: The word for the "zoo" is "Zooli," which doesn't look hard, and I recognize it when I hear it, but every time I try to say it the word for pigs (Seuli) slips out, and I can't quite remember how the vowel is supposed to sound for zoo. M1 politely refrained from laughing until I confessed to her that I couldn't remember which was which, and then she grinned away every time I said it.

Isn't this the cutest piece of bread you ever saw? 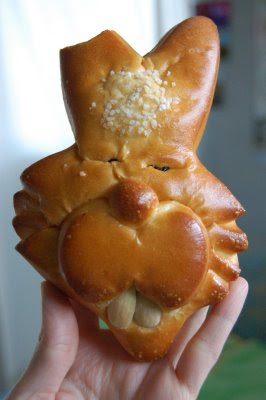 Posted by Stephanie at 3:18 PM