...now with pictures to prove it! 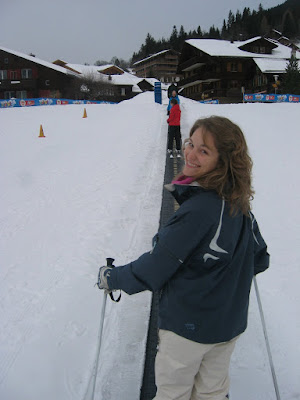 I went skiing (for the very first time) in the Alps this weekend. I have to tell you that before you see pictures of me standing around at the top of the mountain with my skiis off, because if you hear about it from anyone else, they might tell you I spent more time at the top saying, "do I have to go down that?" or scooting down the mountain on my rear grumbling. As I was dreading going down, I remembered trying to creep down a steep hill on a camping trip when I was 4 and being terrified and miserable--and that was just walking on my own two feet! By contrast, if you learn to ski in Switzerland, expect to be shown up by Swiss children who barely come to your knee whizzing by you all day.


But, despite what others might tell you, or what forthcoming pictures may indicate, I did ski a little. Richard's dad was learning too, so Richard spent Saturday teaching us the basics on the bunny hills in Wengen. That wasn't too difficult. Aubrey and Josh were relatively new skiiers too, so they stayed near us most of the day. Sunday morning, we joined Valda, Jen, Dom and Raph on the break-your-neck-and-wish-you'd-mever-laid-eyes-on-a-ski pistes. Richard and Valda and Raph took turns helping me down the hill by holding the two ends of my ski poles while I held on in the middle to stabilize me through the turns. That worked out pretty well. I have my skis for the season and will go again in a couple weeks with the Church, and hopefully at least one more time after that, and maybe by then I won't need so much help. Hopefully I'll get some pictures from this weekend to share with you soon.


The American novelist Shirley Ann Grau theorized that winter is "a kind of evangelist, more subtle than Billy Graham, of course, but of the same stuff." From the Piz Gloria revolving restaurant at 9,748 ft., it seemed likely. 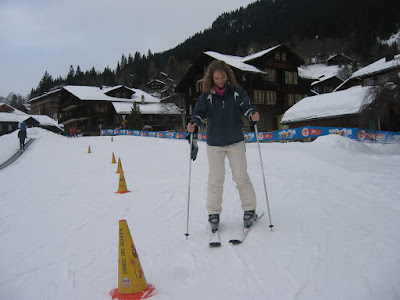 The cones really clear up any doubt about where I am, don't you think? 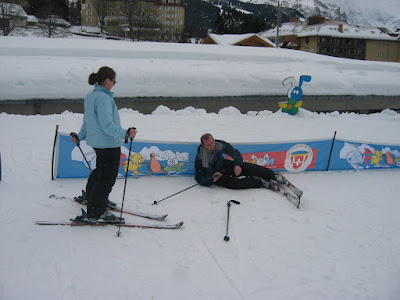 Here we have Josh, about to demonstrate how to get up after a tumble, which he had already graciously demonstrated. 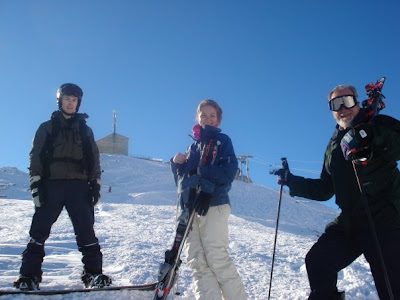 Standing around at the top of the hill. That's Richard's Dad Malcom on the right, looking very hip. And of course Dom on the left, looking sorta hip. 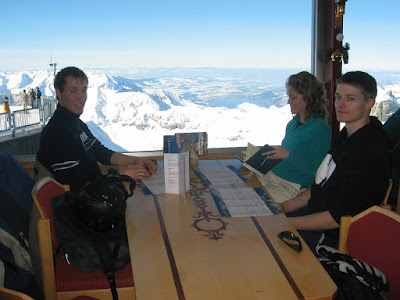 Lunch! seems like I was once in another restaraunt that revolved, but I can't remember where. It wasn't the space needle; I know that. 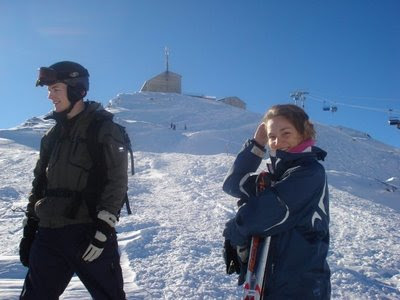 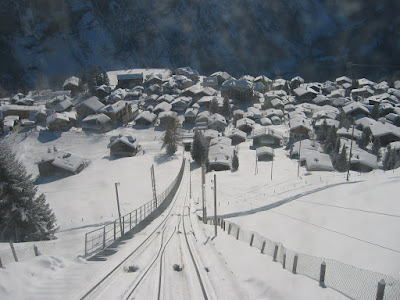 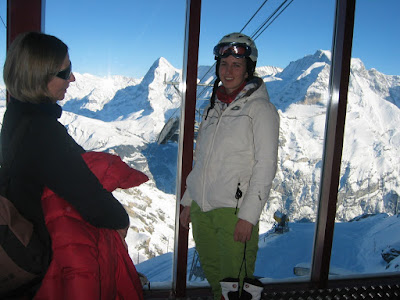 Posted by Stephanie at 9:00 AM