Hmm, where to begin. It's hard to know what to write when I haven't writtten anything in forever. I'll start where I left off: the ALPS! Switzerland boasts some really pretty mountains, and we had a great time tramping through them a few weekends back now. We headed south after work on Friday night, taking a train and then a cable car to Reideralp. We stayed at Villa Cassel, a really cool old house that Winston Churchill used to stay in when he came to Switzerland. That alone was enough to convince this little historian to stay there instead of hiking up further to more rugged accomodations. But it was slightly rugged, in a 1915 sort of way. We had a budget room upstairs and had to take the back stairs to get there, but whenever we came up or down to breakfast, showers, etc., we exited the staircase on the fancy floor and imagined we were staying there instead. When the housekeepers weren't looking we peeked in one of the rooms and they had cool period furniture and sinks and everything down there! So next time...I am SO staying in the Winston Churchill room. So I can highly recommend both levels of accomodation, but don't think that just cuz you're staying in a fancy house, you won't need a flashlight! We walked from the cable car station 20 minutes or more up the hill in the foggy darkness sharing Josh's flashlight, cuz, whoops! Aubrey and I kicked out of camping mode as soon as there was a house involved and sort of kind of forgot lights.

The next day we hiked down to the hanging bridge and up the other side of the Ravine. It took us a long time on the slick muddy trails, but we were thankful to not have any accidents! 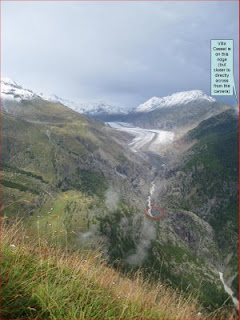 The bridge we crossed is circled in red, and on the left side you can see roughly where we came from. 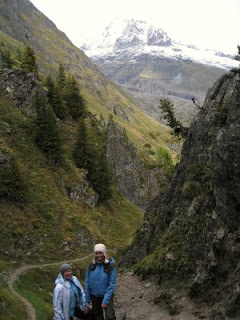 We're almost to the top! 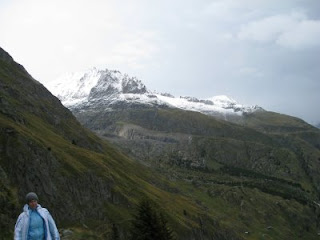 The sun joined us for the afternoon, dried our clothes and made the mountain sparkle. 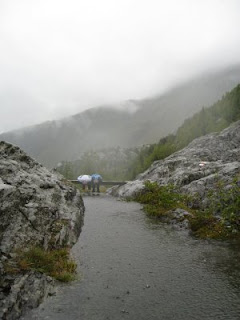 But don't let anyone ever tell you hiking in the rain isn't fun. They probably just want the trails all to themselves. 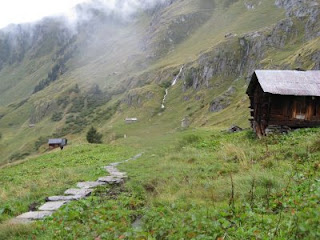 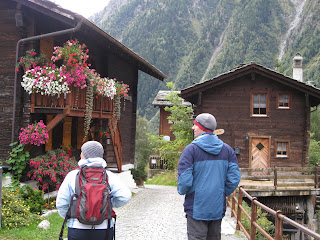 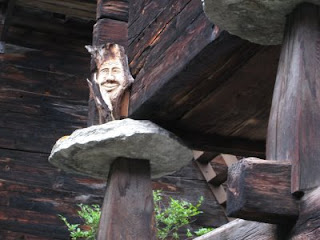 Interesting supports under the houses.

So...there you have it. An Uncle Ernie? next blog: Budapest! I hope it'll be sort of soon. Say hi to Auntie Evelyn for me! Love y'all!
steph
Posted by Stephanie at 6:27 PM