Despite a few stressful points, it was a fun trip. We met some interesting people, though it was a slightly intimidating crowd...definitely mostly not our peers! The Vice President of Tanzania was there, for example, along with the Minister of Health and various other dignitaries. I didn't recognize them before dinner, and I'm not sure if I'm glad or disappointed in retrospect that I didn't unwittingly introduce myself to the VP as "Hi, I'm Stephanie! What's your name?" Raph said no matter how 'important' people are, they're still just people. (That's a good perspective, but the problem is not everyone else is so egalitarian) I enjoyed hearing the VPs address later in the evening, though, and seeing the Touch Foundation people at work as hosts and organizers. I have several very good classes this semester on humanitarian intervention, African Societies, African Cities, etc. It's great to be interacting with the topics in "real life" as well as in my classes.

Earlier on Thursday, Raph and I met up with Ben, who took us to the Camden Stables Market. Unfortunately, our lunch didn't agree with Raph and he felt quite sick by 2 pm and wasn't sure he'd make it to dinner. While he stayed at the hotel, Ben and I trucked via a crowded Tube over to Westminster Abbey for the sung Eucharist celebrating the Annunciation of Our Lord. It was good to have a little quiet time with God to focus on his incarnation as the context that directs our interactions with our neighbors at fancy dinners in London and our neighbors in Tanzania.

When we got back to the hotel, Raphael was feeling much better thanks to the concierge's recommendation that two shots of vodka with pepper would settle his stomach. :) And so we went to dinner. 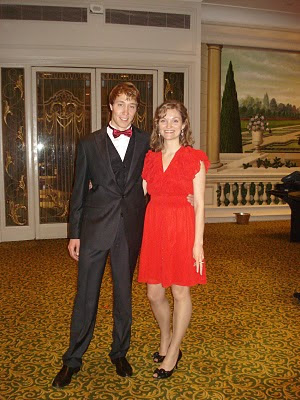 He cleans up pretty well, doesn't he?

After dinner I was talking with a guy at our table who works for Vodaphone. He was telling me about projects they're doing using phone accounts as a vehicle for cash transfers to rural areas. For example, a doctor in a rural area in some parts of East Africa may be paid by someone crediting money to his phone. He can then "cash" as much of that as he'd like, or transfer it on to another person's phone if he wishes. Pretty interesting idea! It has some potential problems, of course, and governments are not necessarily excited about a phone company taking over activities that are normally handled by the banking industry. Anyway, I don't know very much about it, but it was interesting.

And that, friends, was my Thursday in a nutshell.
Posted by Stephanie at 1:46 PM