Mid-November Canadian Dave and I co-hosted Thanksgiving again this year for a group of our overlapping friends and colleagues. We plan it in between their Thanksgiving and ours, and though Dave was the only Canadian present, we tipped our hats to our neighbors to the north and their earlier harvest season.  Eighteen people filled my dining room and living room with cheer. I wish I had a picture of the whole house at mid-meal or just after, when everyone was chatting with their neighbor and acclaiming Rebekkah's sweet potato pone, making new friends and telling funny stories with old ones. And the men were talking about Dodge Vipers. A house full of that is a recipe for a happy Steph. Also, I think the purple candles are happy, even if Dave did think they were tacky and hillbilly and tried to hide them by the printer before dinner so I couldn't put them out. 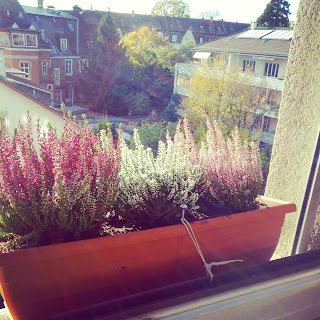 I planted flowers for the event. 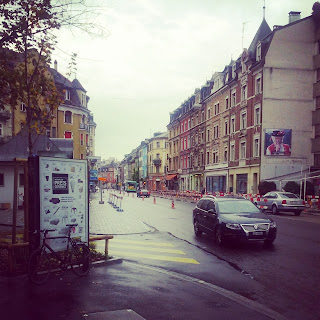 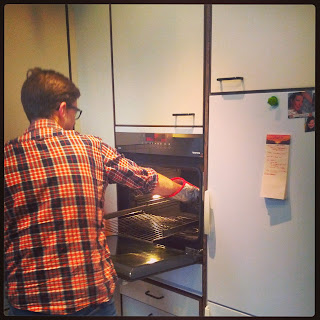 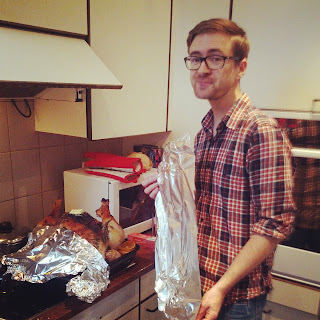 I ordered an 8 Kilo turkey from the turkey farm, via the grocery store butcher. But when I went to pick him up on Friday night, the butcher looked nervous and joked that the bird "had eaten very well." It was 11 kilos. Dave and I learned that an 11 kilo turkey is the biggest bird that will fit in my oven. And by 'fit,' I mean that's the biggest bird that can be crammed in, inches from the bottom and top, and there's no room for a pan to catch the drips, and you might have a smoked-filled kitchen at the halfway cooked point. Two weeks later, I'm still cleaning my oven. 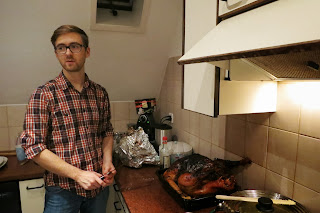 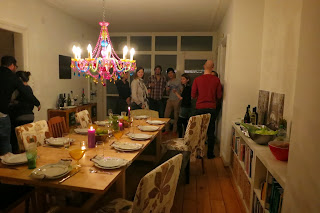 Apero in the entry way. One of the few things I don't love about hosting parties in our apartment is that people tend to congregate right in that spot instead of spreading through the house. I've tried scattering the food around the house. I've tried adding chairs to the living room. I'm stumped. I think I'm going to give up and just add lights to that corner for parties, so at least they aren't standing in the dark. 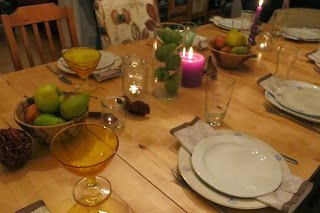 Dave was concerned people wouldn't know that the pears were decorations and not for eating. 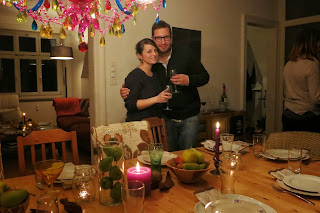 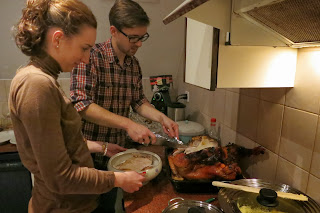 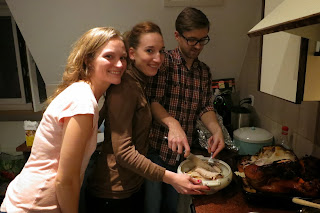 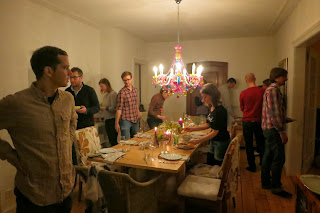 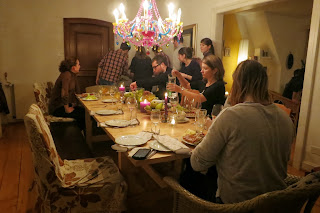 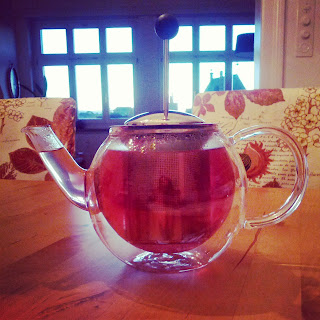 This week for real thanksgiving, like Dave with his flannel, I also noted the holiday with an apparel choice: this Bambi sweater grandma knitted for my aunt more than 30 years ago. Grandma made the sweater for Aunt Cathy when she was a kid. Cathy probably got tired of it and then it moped around Grandma's house for a while, drinking martinis and asking why life has no meaning anymore and what's-the-matter-with-kids-these-days. Then, Grandma got sick of listening to it whine when I was, oh, around 15. So she suggested the sweater get out there again! get to know some new people! So it came to my house. I liked it, and it fit, but I felt it was a little too...hmm..homeschooled, shall we say, and I wouldn't wear it in public. But the last couple seasons, there's this and this, not to mention this. Grandma and the sweater were just ahead of their times, and now when we go out together, the sweater gets compliments every time, and nobody seems to be thinking "there goes that homeschooler" or "there goes that 1970s Bambi has-been with a martini problem."

I like that I have a tangible pieces of my family's generosity, creativity and hospitality here in my Swiss home. Tea pot from Gregg, rug and quilts and pie recipes from mom, sweaters from grandma. This week at some points I felt like I still don't quite fit here, even after 6 years. I can't say nearly as much as I'd like in Swiss German. I'm stuck listening, especially in groups, when people make more jokes and I'm not familiar with everyone's dialects, and I'm not always quite sure I got it all. Then I worry that people will decide I'm no fun and not interesting and won't include me anymore If I don't hurry up and start talking. But then there's the trouble of divergent interests. I'd rather make stuff than go dancing, would rather draw the mountains than slide down them on death sticks. I have enough plates to serve 18 people dinner and dessert without washing anything in between, and I do it. That's not normal here. But I think it's me...and I'm thankful for the plates (lots of hand-me-downs!) that let me invite so many people over, and the recipes (not afraid of my kitchen) and the artsy crafty skills my family gave me.

And I've decided I'm not talking in English for the rest of the year to anyone who can speak Swiss German better than I can, and instead of spending money on ski lessons, I'm 90% decided I'll go take a painting workshop in rural Morocco in the new year. Normal schnormal, right? Be who you are. But do try to speak the language, cuz, geez. We don't need to feed that unflattering stereotype about Americans. 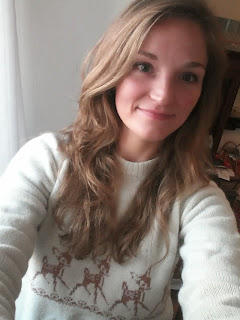 Posted by Stephanie at 2:15 PM