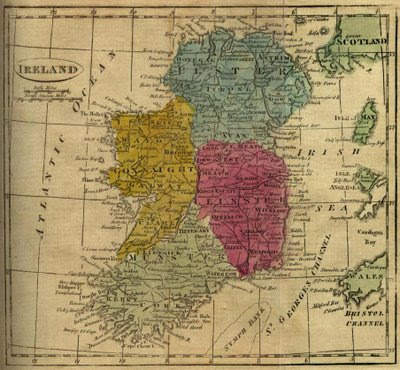 I'm bound for Ireland this weekend, as you know, and since it was also St. Patrick's Day this week, I thought it appropriate to focus on that wee green country today.

Professor John V. Kelleher, the famous Harvard Irish-American scholar who died a few years back, said that his earliest acquaintance with Irish-American history of the written variety "was gained from the sort of articles that used to appear in minor Catholic magazines or in the Boston Sunday papers. They were turgid little essays on the fact that the Continental Army was 76 percent Irish, or that many of George Washington's closest friends were nuns or priests, or that Lincoln got the major ideas for the Second Inaugural Address from the Hon. Francis P. Magehgegan of Alpaca, New York, a pioneer manufacturer of cast-iron rosary beads." Kelleher called this the "there's-always-an-Irishman-at-the-bottom-of-it-doing-the-real-work approach to American history." That makes me laugh, because even though those essays he read were probably published in the '40s or so, I occasionally get emails in the same tradition, attributing all sorts of greatness to the Irish.

I do agree the Irish are lovely (consider Valda and Elaine, for instance), but did you know we americans apparently have a reputation among them for being a bit naive and too trusting? Valda's brother (I think it was her brother) once met some American girls who were concerned over the problem of Leprosy in Ireland. "Leprosy! there's no Leprosy problem in Ireland," he said, quite dumbfounded. "Yes there is," they insisted. Some Irish guys they met had told them all about the Leprechauns and the tragic leprosy situation in the country.

"Girls like that shouldn't be allowed out of their country," Valda's brother concluded.

I'll do my best to not confirm that opinion while I'm there, but... well...you know how I am.

In other news, Joe Purdy has a purty voice.